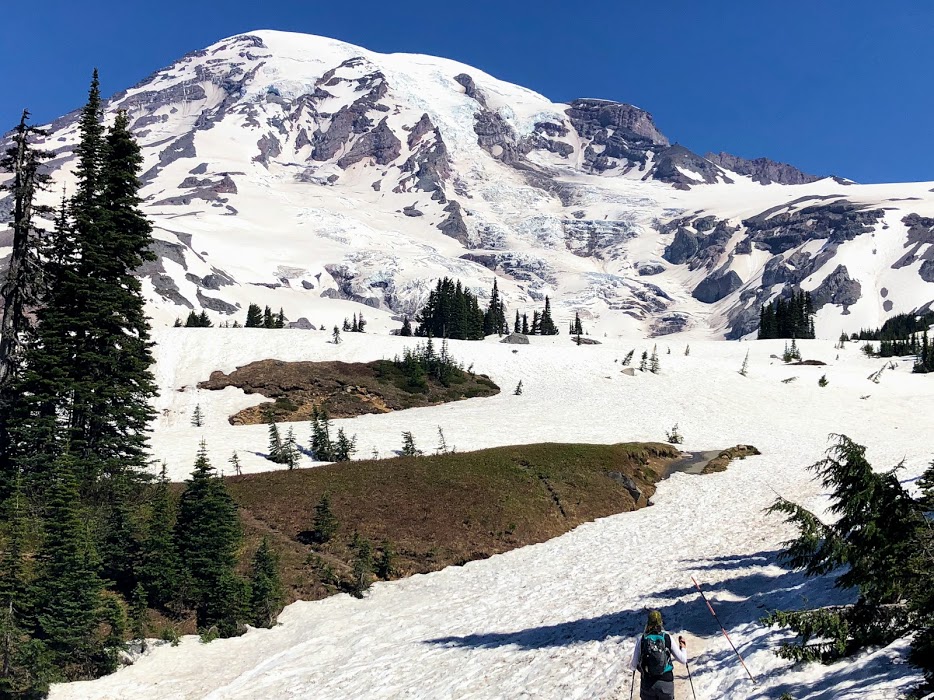 Court had a conference in Seattle and I got to tag along, so the first day we rented a car and drove to Mt. Rainier National Park.  Mt. Rainier is the fifth national park in the system, established in 1899.  It is also the highest peak in the Cascades, topping out at 14,411 feet.  We didn’t get quite that high today.

Originally I had wanted to go to the Carbon River section of the park, but the road to that trail head wasn’t open for the season yet.  Paradise is considered one of the more beautiful parts of the park and I figured since we were going on a Wednesday morning, hopefully the crowds wouldn’t be too bad.  Between that and the snow still covering most of the trail, the Skyline Trail ended up being great, albeit a lot of work.

We arrived at the Visitor Center around 10am to clear skies and an amazing view of the mountain.  We took a few photos and then set off up the snow covered trail, marked in many places with flags in the snow placed by rangers.  We didn’t have microspikes for traction, but we ended up ok.  It was definitely slow going.  We averaged about 1.2 mph, compared to the normal 2 to 2.5 mph on regular trail. 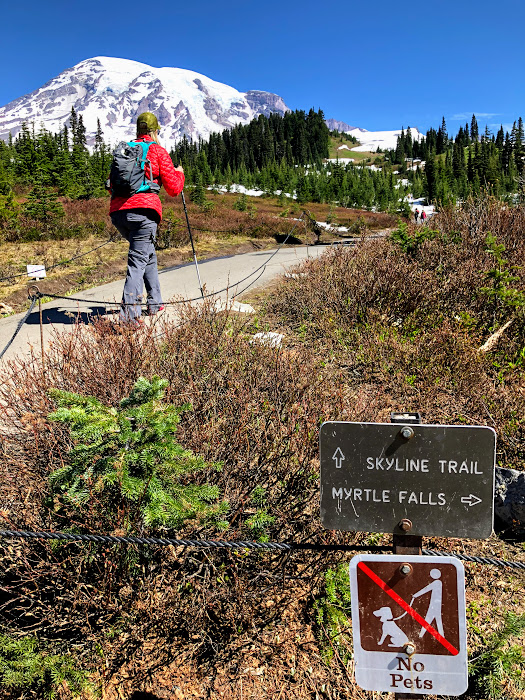 The views got better and better as we climbed.  There were a couple of melted out parts of the trail where we stopped and re-fueled.  We met a family from England who were road tripping in the US and also a couple from Pennsylvania when we reached Panorama Point.  It’s always nice to talk to people who are there to experience the same beauty you are.  There were also several marmots and multiple chipmunks about, scrounging for human food. 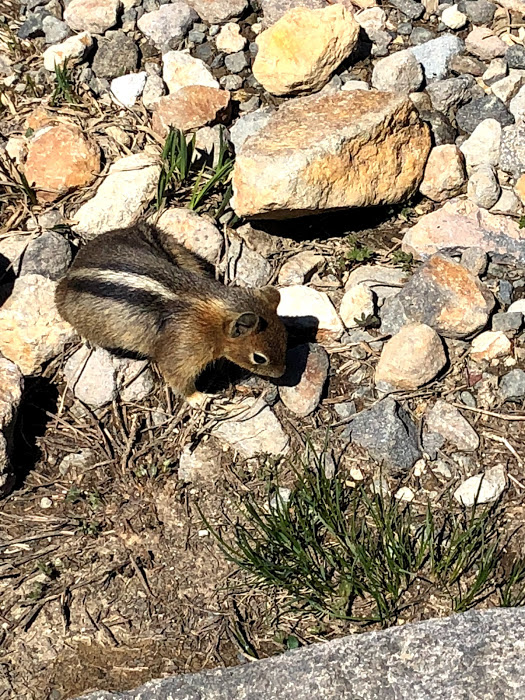 We continued up the trail and it started to get steeper as we got further along.  We also crossed paths with some hikers coming down from the summit.

I somehow forgot to add this video when I first wrote this entry, but better late than never I suppose.

As we ascended, the views of the mountains became grander and grander.  We had views of Mt. Adams, Mt. Hood, and Mt. St. Helens.

We reached the plaque at the top of what I think might actually be slightly below Panorama Point, but with the snow covered trail, this was good enough for us.  It would be Panorama Point today.  There was another marmot up top that was sprawled out and sunning on the snow.

Mt. Rainier was now totally enveloped in cloud and we were glad we had such great views on the way up.  We decided to turn back and go down the way we came instead of finishing the Skyline loop, as the weather looked like it might turn.  We’ll come back one day and finish the whole thing.  Great hike and only a couple of slips on the snow.

Once we got back to the car, we decided to drive down to Reflection Lakes and do a quick loop on the Wonderland Trail and High Lakes Trail, but were blocked about a half mile in by a creek crossing that was doable, but just too dangerous for today.

We turned back and decided to call it a day.  At least I got to step onto yet another of the long trails that I love so much and add it to my list.  We made a quick stop at Narada Falls (amazing) on the way out and then hit the Copper Creek Inn just outside of the park for lunch, which included their incredible blackberry milk shake.  YUM.