Just when I think we have exhausted all the hiking trails around Austin, we seem to keep finding new options.  Courtney found this trail on texashiking.com in the morning and we headed out to Lakeway, but didn’t hit the trail until about 11:30am, way later than normal.  Due to this, we had to cut the hike a bit short, as the midday sun was starting to beat us down.  Biff loved the water today.

The main trail was wide and made of crushed granite and followed Hurst Creek, which ultimately feeds into Lake Travis.   There were a couple of great waterfalls along the main trail and the creek was still flowing well from the recent rains.

At the biggest waterfall Biff stumbled onto a snake that quickly took to the water and swam off.

There was also a smaller dirt trail that paralleled the main trail and wound deeper into the woods.  We chose to follow this dirt trail for a while to stay in the shade.  It took us away from the creek for a while and was a nice respite from the other runners and walkers on the main path.

We had stopped for a water break when I noticed  a tiny fawn hidden in the tall grass just off the trail.  It wasn’t moving and didn’t seem scared, allowing us to get within a few feet of it.  We weren’t sure if it was injured or if its mom had just stashed it there and was coming back for it later.  I’m choosing to believe the latter and that the little guy was safe and sound after we left.

The trail came back to a smaller creek that fed into the main creek and we took our shoes off and waded a bit and ate a small lunch of watermelon and cantaloupe.  It was beautiful. 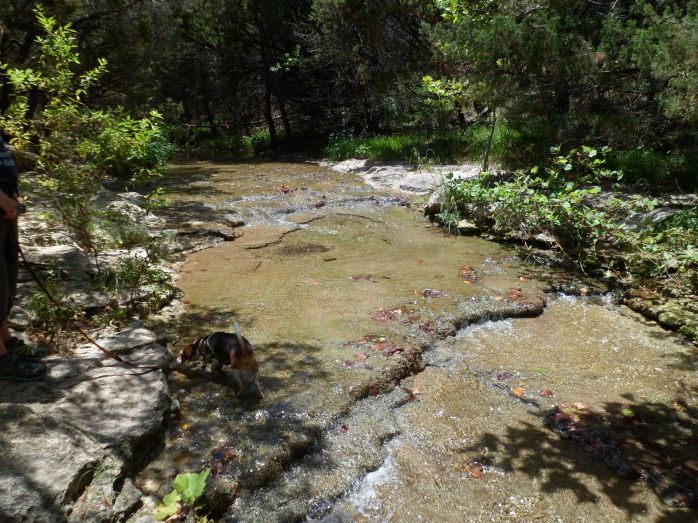 One of the best things about this greenbelt is the myriad side trails that take you to some nice hidden spots.  We found one that went down into a canyon and felt totally different from the rest of the greenbelt.  There was another creek in the canyon with lots of fish and we also saw a huge blue heron or crane, not sure which, flying overhead, but I couldn’t get a picture. 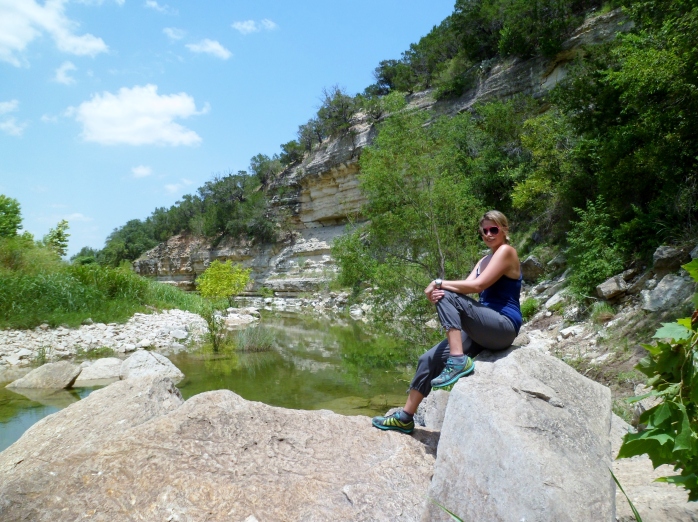 It seems that summer has finally hit Texas, and as the sun continued to wear on us, we let Biff cool off in the creek again and decided to head back to the trail head.  We left about another 3 miles of trail to be explored for another time.  We will be back, but in the early morning when temperatures are more manageable.  This trail was a great find though.