Length: around 2 miles each hike

The weather in February and March has sucked so far this year, but we stuck it out and went for an overnight anyway.  The rain held off, but the cold did not.  I bought a little thermometer recommended by Stick, of Stick’s Blog fame, that records the high and low temps for a 24 hour period.  It got down to 34 overnight and was low 50s for a high.

Got out to the park, about an hour southwest of Austin, around 3pm and set up camp.  Once we had all the tents up we drove over to the Pedernales Falls trail and walked down to the water and blazed our own trail as best we could.  Biff was pretty much a terror.  He wanted to run with Sam, but with his back injury, he has to stay on leash and I had to carry him a lot of the way.  Basically he was screaming bloody murder and trying to get back to Sam the entire time.  It was exhausting.  But the falls were beautiful. 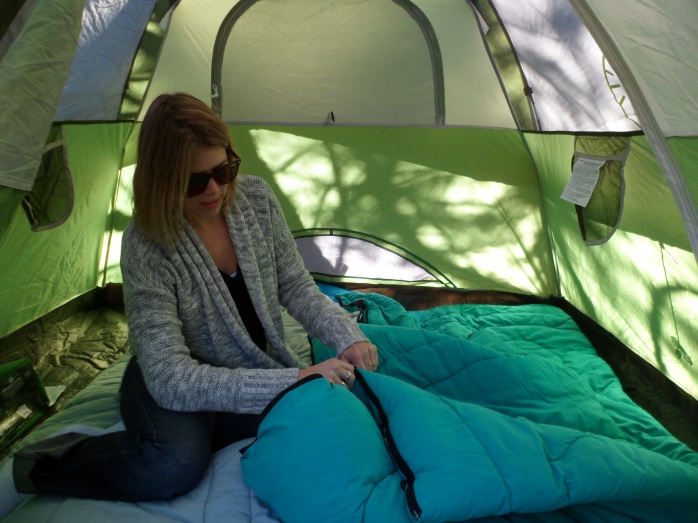 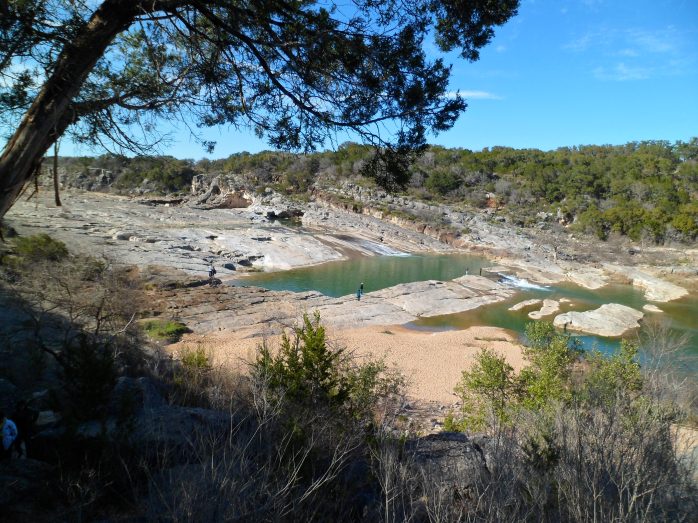 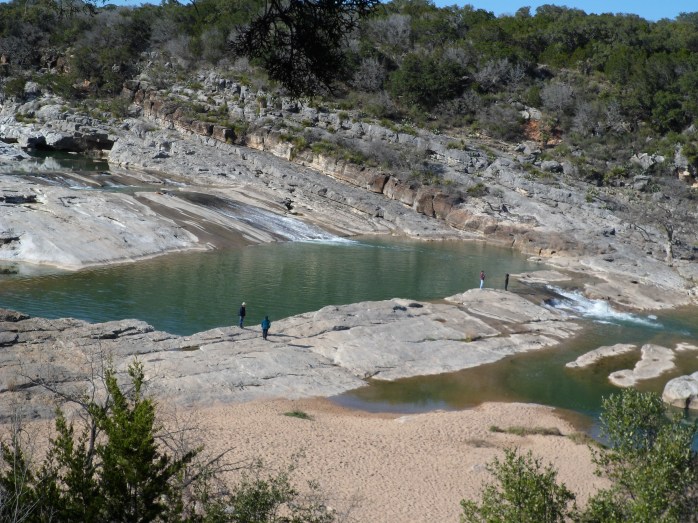 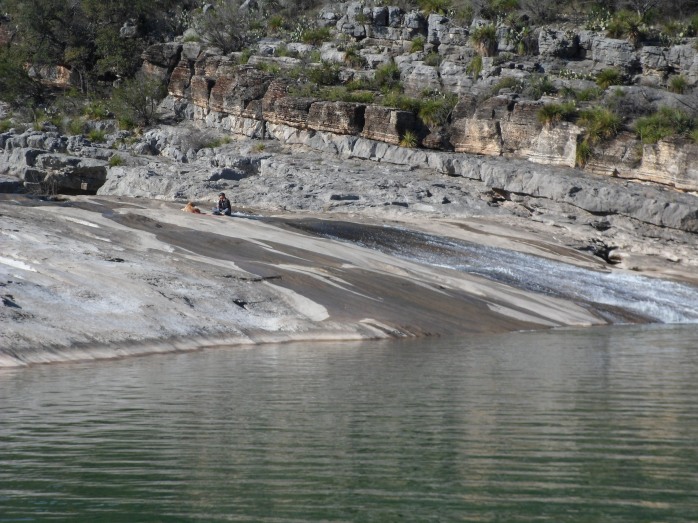 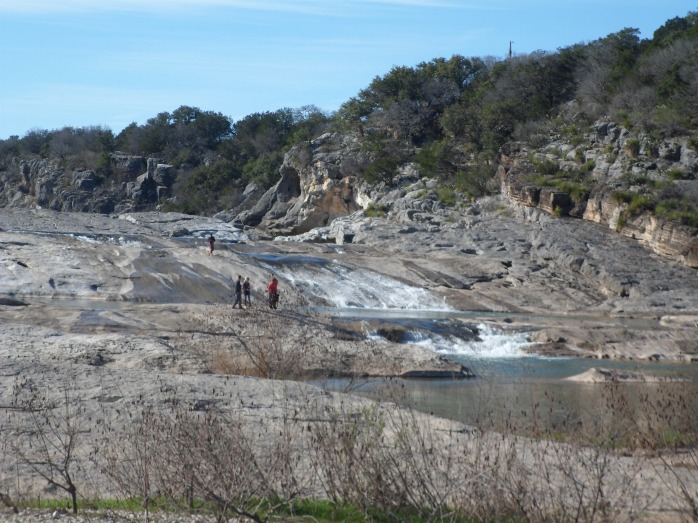 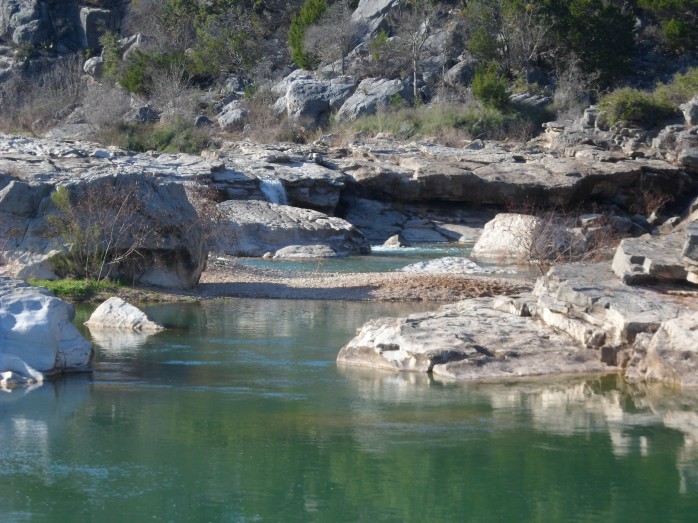 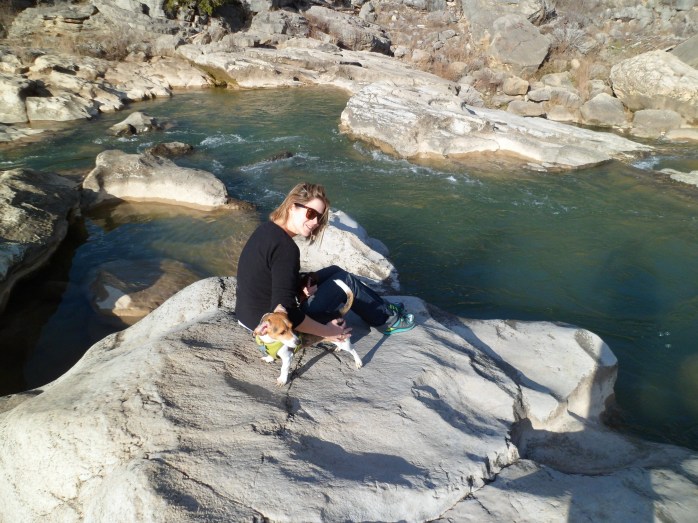 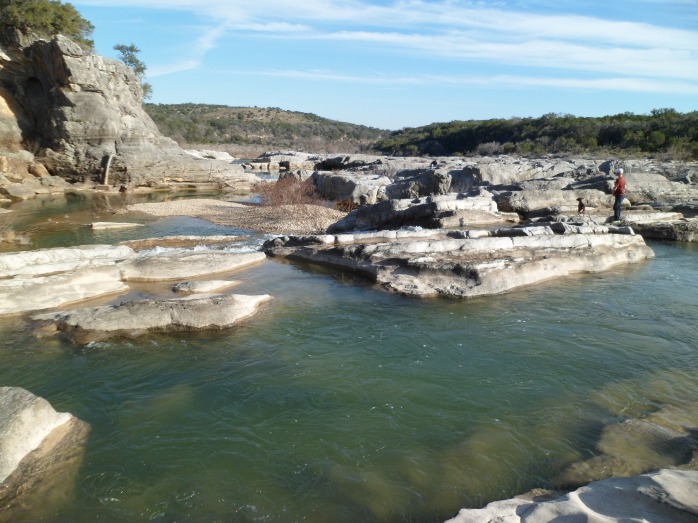 We got back around dark and started building the fire as the temperature was dropping fast.  It took a while to get going, but it was blazing after a while and kept us all really warm.  The dogs were not super happy.  We made a couple of pocket stews that Court had prepared and then made s’mores.  We crashed out around 11 and stayed relatively warm most of the night.  We are still using the Coleman sleeping bags from when I was a kid, but they are still warm. 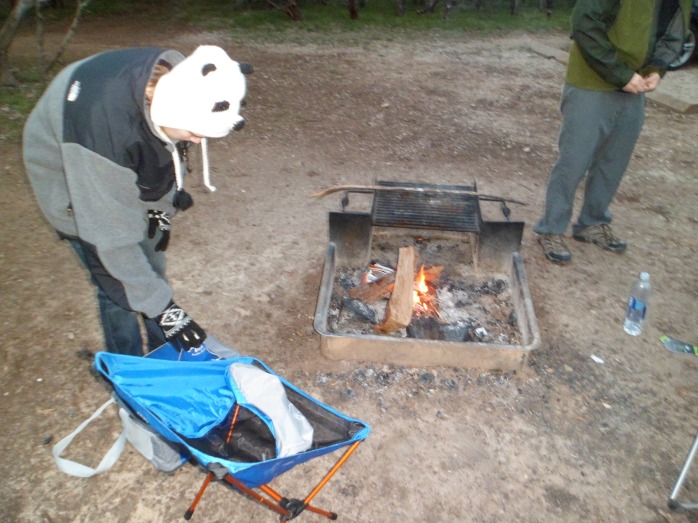 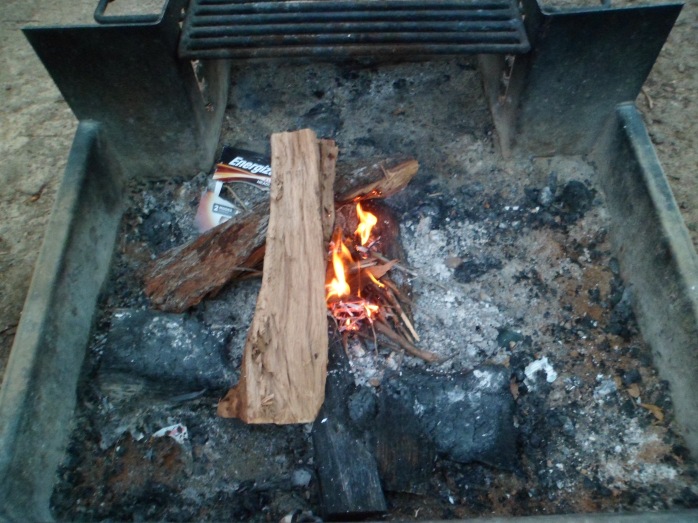 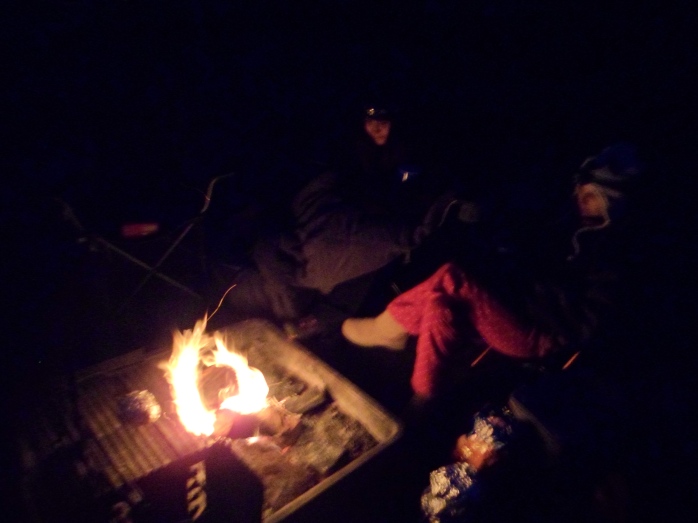 When the sun woke up, so did we.  I made coffee using Jiva coffee cubes that are perfect for backpacking.  They make some pretty damn good coffee and are easy and very light.  Good work Jiva.

We had a wedding shower to get to back in Austin so we were a bit short on time for hiking in the morning and decided to do the Twin Falls trail, which is just about half a mile.  However, we took a wrong turn at Albuquerque and ended up going about 2 miles through the woods and ended up at the park road and had to follow it back to camp.  Biff was still a crazy pup and screaming whenever I had to carry him.  All was good though and we packed up and checked out the bird blinds on the way out of the park, which were recommended by a couple of the park rangers. 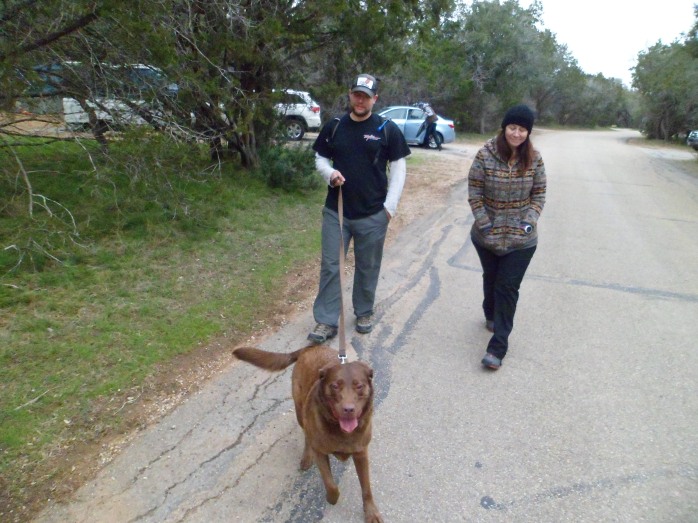 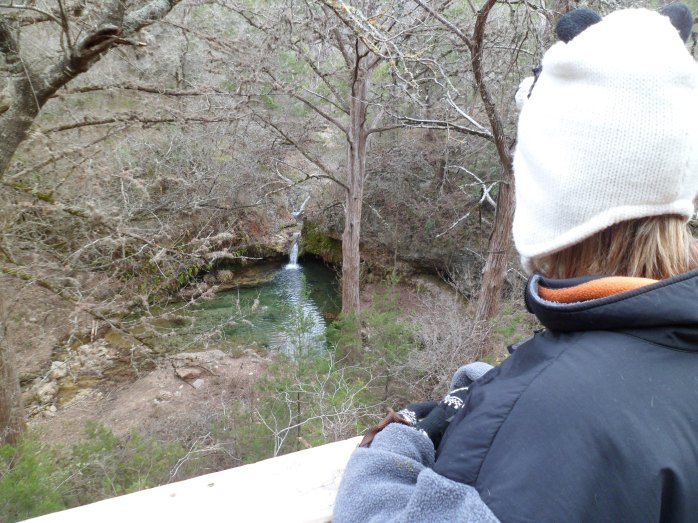 We are going to go back some time this summer and hopefully get two nights in and do the longer trails.  Pedernales Falls is definitely one of the better state parks in Texas.  Glad to have it so close to home.  Map is coming.  My phone died so Greg is supposed to provide the GPS track off his fancy pants watch.  See below.  Thanks Greg! 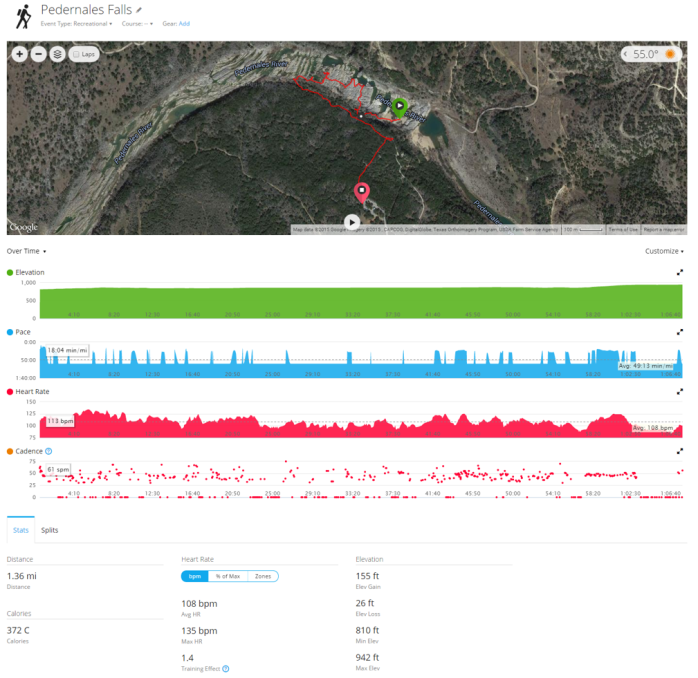 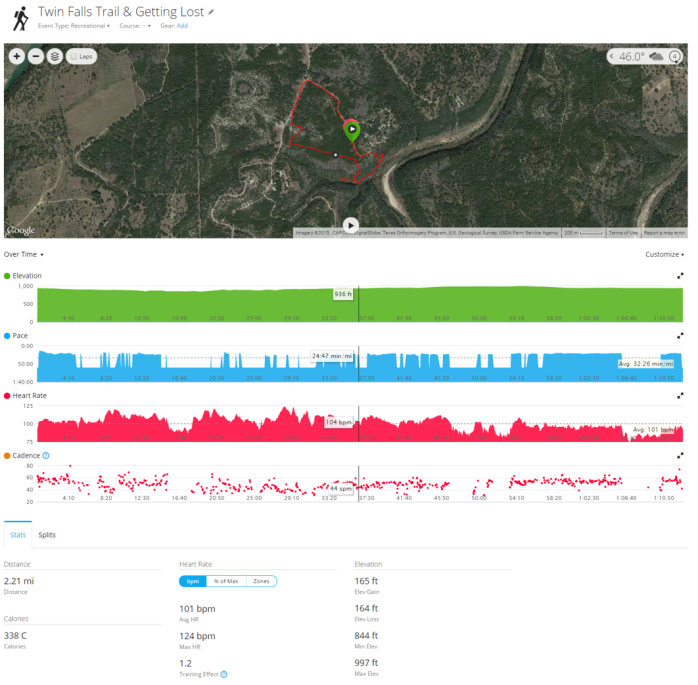