Our first official backpacking overnight was a success.  After two years of gathering gear and learning, we finally got to put it into practice.  The leaves haven’t started to turn yet, as it has been a very warm fall so far, but it was still beautiful.

We made the 3 hour drive through the Texas Hill Country out to Lost Maples State Natural Area and stopped at a great little cafe in Medina for lunch. 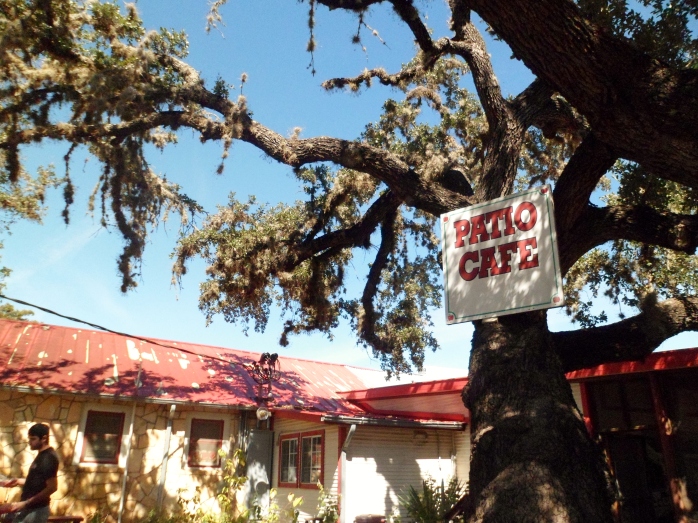 Just outside the Vanderpool area we passed by the Siesta Valley Ranch, which is a working dude ranch at the base of a huge cliff with longhorns and bison and a beautiful lake.  Court was in love. 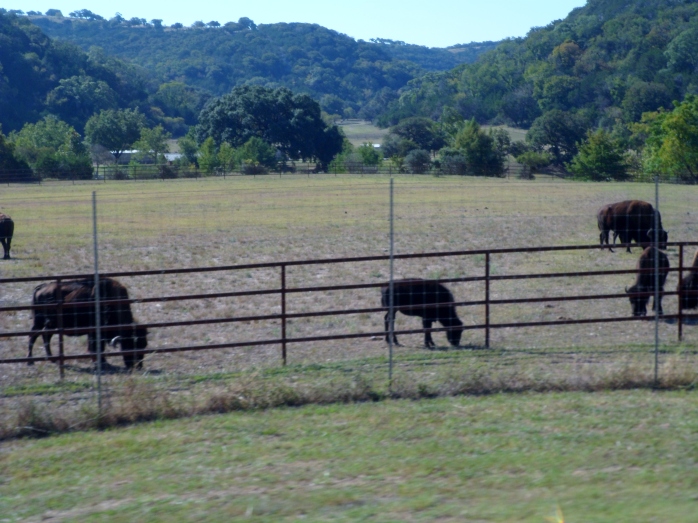 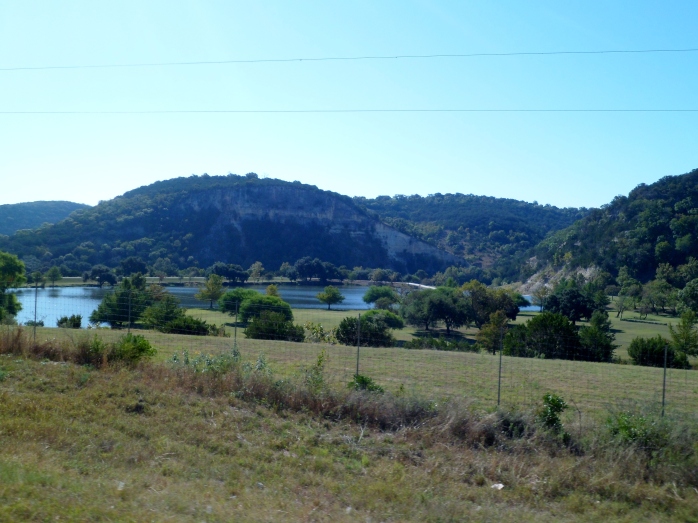 We reached the park just after 1pm, not sure of what kind of crowd to expect.  The parking lot was actually pretty empty.  I asked the rangers if there had been a lot of hikers in so far and they said no, but they expected it to get packed later on.  We paid our entry fees and drove to the trail head.  It was a good feeling to head off on a trail knowing that we would get to the end and set up camp, instead of having to just turn around and come back to the car. 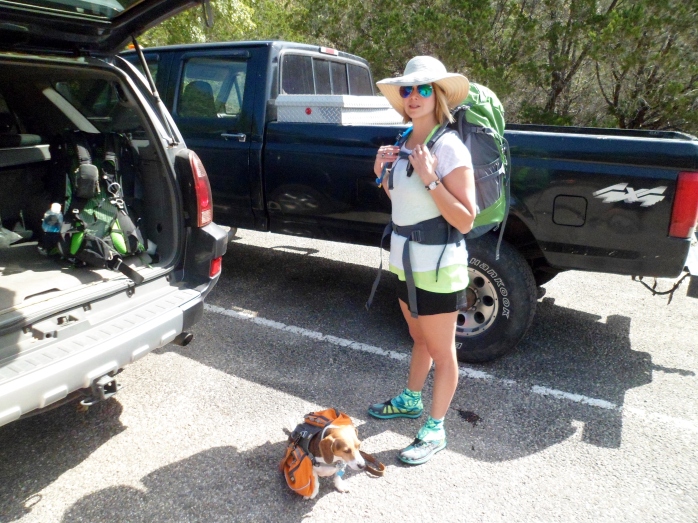 We started off on the Maple Trail, which takes you through the main stand of the “Lost Maples”: Bigtooth Maples, which are a holdover from the last Ice Age.  The trails are very rocky and sometimes simply follow the dry creek beds. 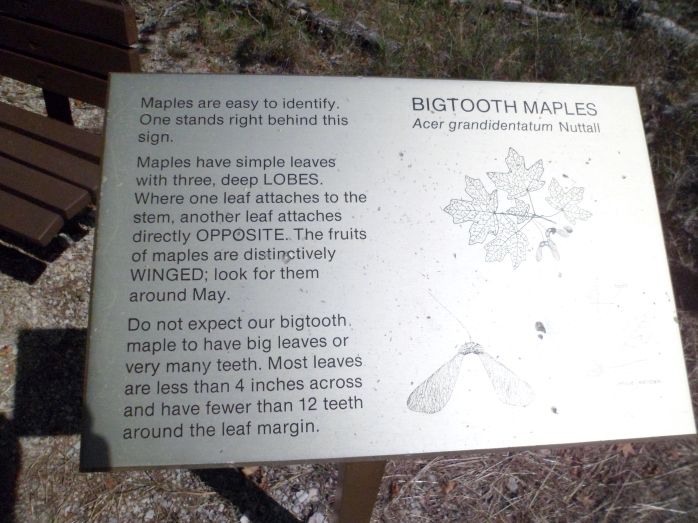 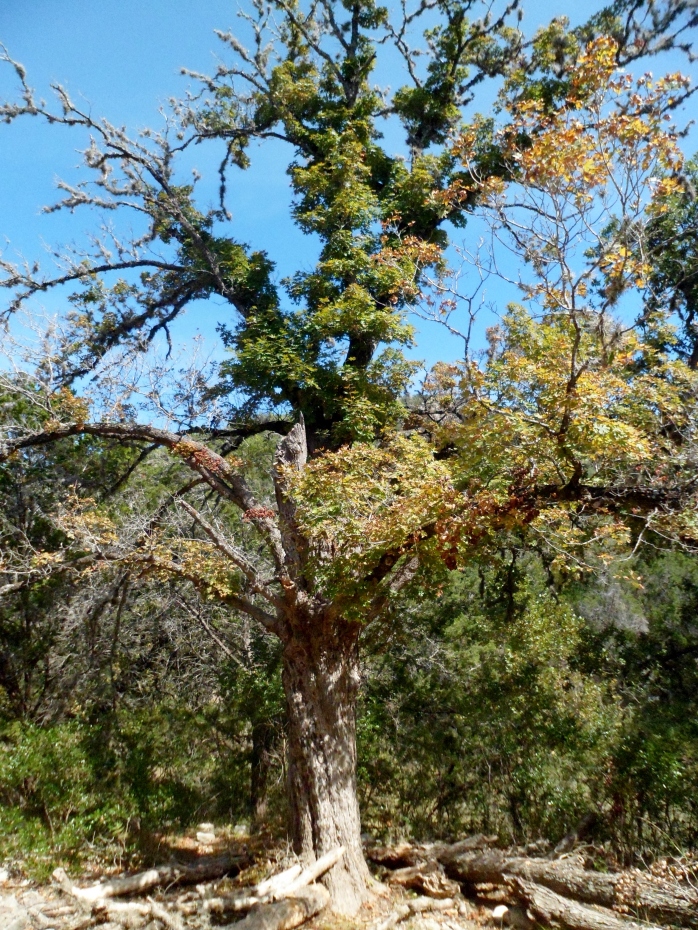 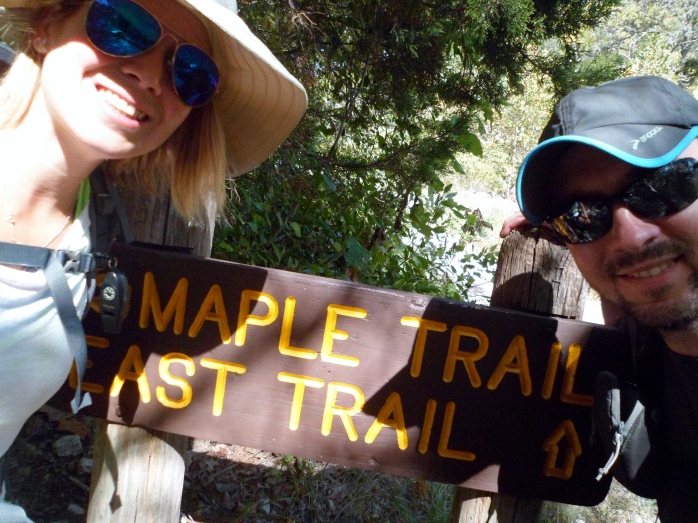 Not long after, we came to Monkey Rock.  It’s a huge natural rock formation that, well, looks like a monkey.  The scale is hard to tell, but it’s probably 30 feet tall.

After Monkey Rock came the Grotto, which was very beautiful and is probably even better when the water is higher and dripping from the rocks. 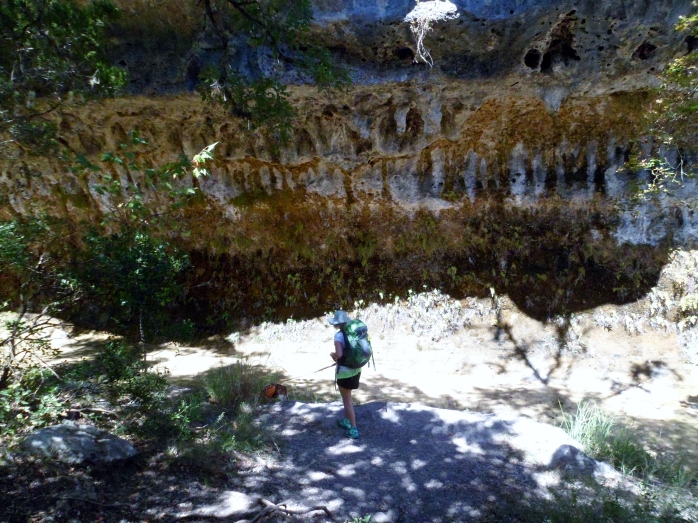 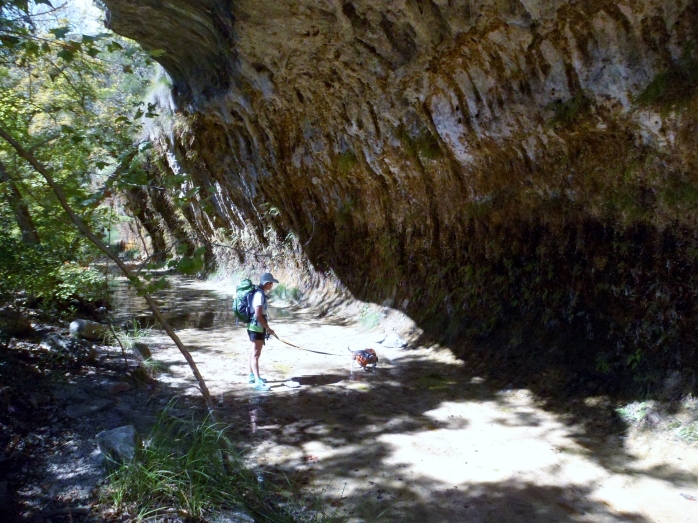 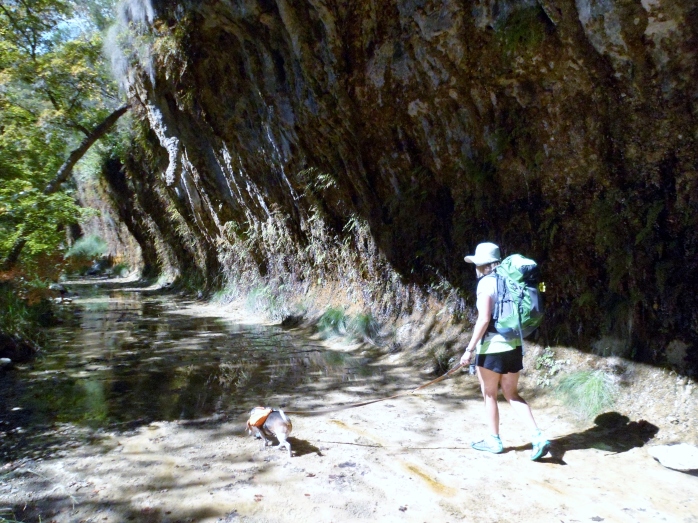 We then came to the biggest climb of the hike, up to the top of a plateau overlooking the whole area.  It was straight up and I was carrying Biff most of the way, since he is barred from climbing steps due to back surgery a few years back.  We got to the top and took a break and enjoyed the breeze and the views.

We walked along the plateau to a lookout point, but the sun was starting to beat down again and it was very exposed, so we continued on and took the difficult trail down, which was more of a vertical scree field than a trail.  Finally at the bottom, we took another break at the primitive campsite next to the pond and filled up our bottles.  The water was cold and felt great on our feet. 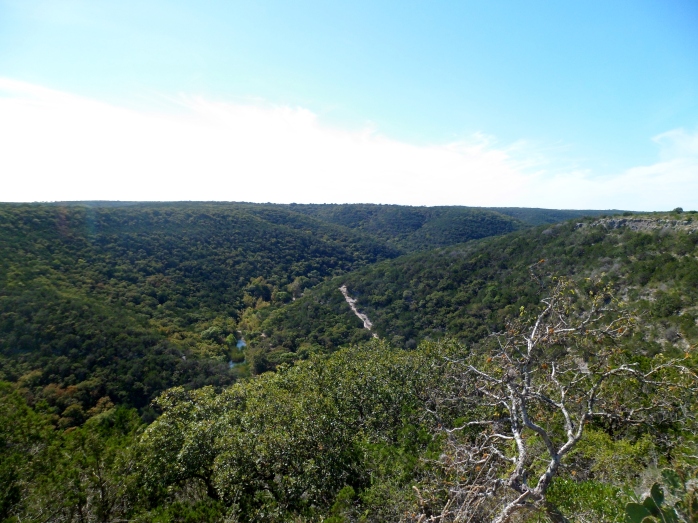 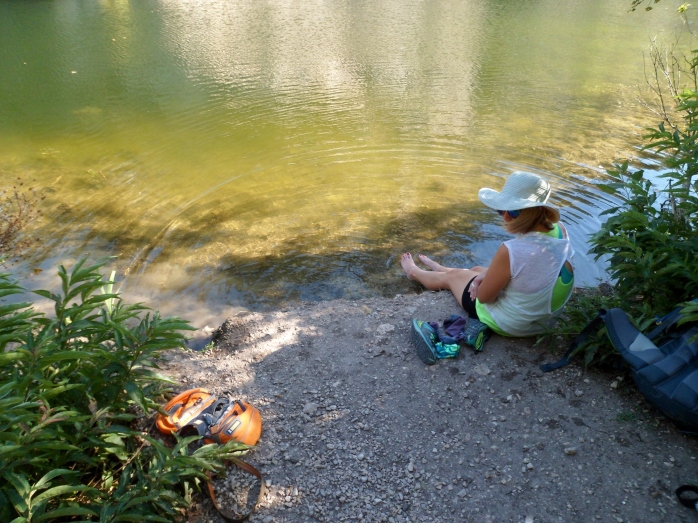 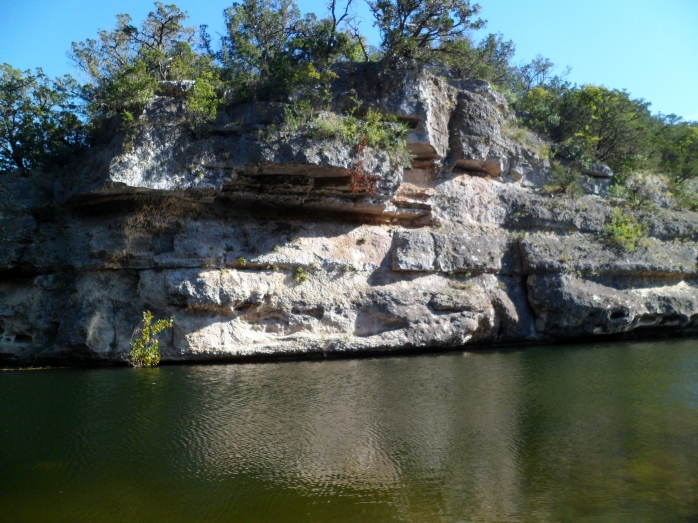 We continued on down the trail and basically followed the creek bed for most of the way to camp.  On the way we passed a small pond with some great reflections. 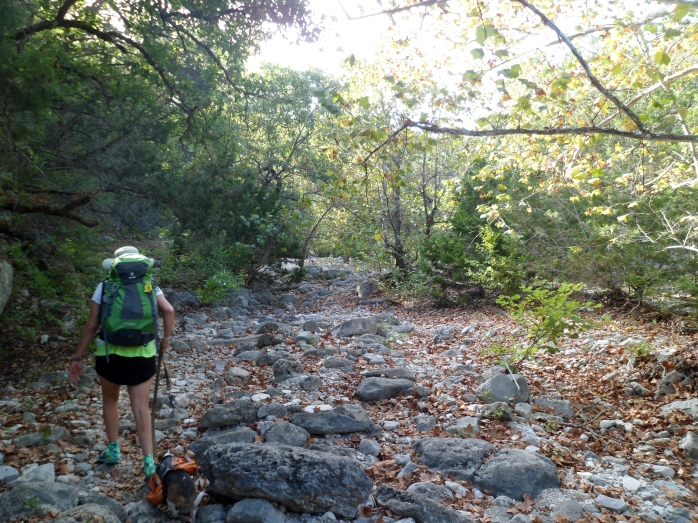 We got to camp and set up, but used most of our water to cook and clean dishes, so we had to backtrack about a mile back to a spring to filter water so we had enough for breakfast the next morning.  Having to really gauge our water use was a new experience.

We woke up the next day with the sun.  The temperature got down to the low 50s, but it felt quite a bit colder for some reason.  We packed up pretty efficiently and headed back down the path we came.  We had originally planned on doing the outer loop of the West Trail, but didn’t feel like another steep climb so early in the morning so we came back and took the flatter trail through the middle of the park.  The sun hitting the valleys and trees created some great scenery on our way back to the car. 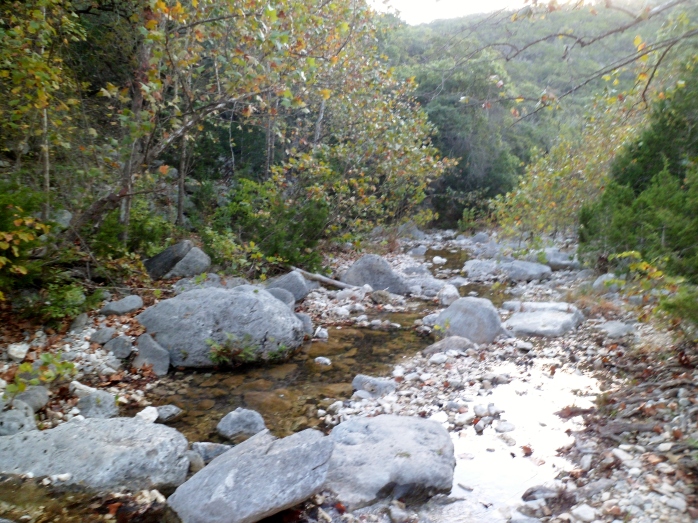 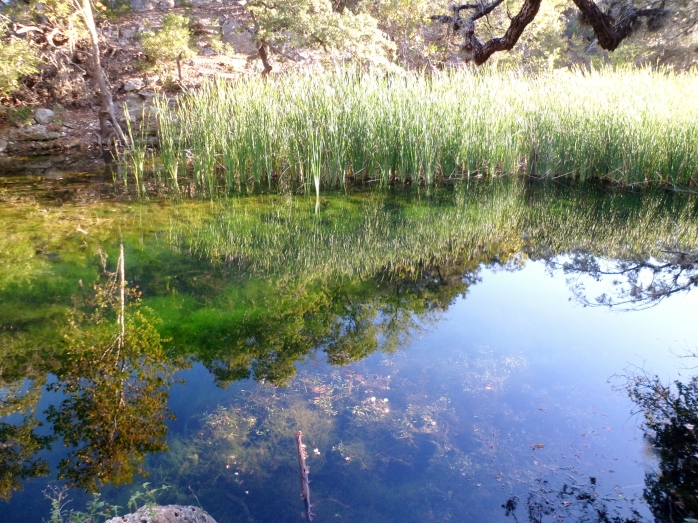 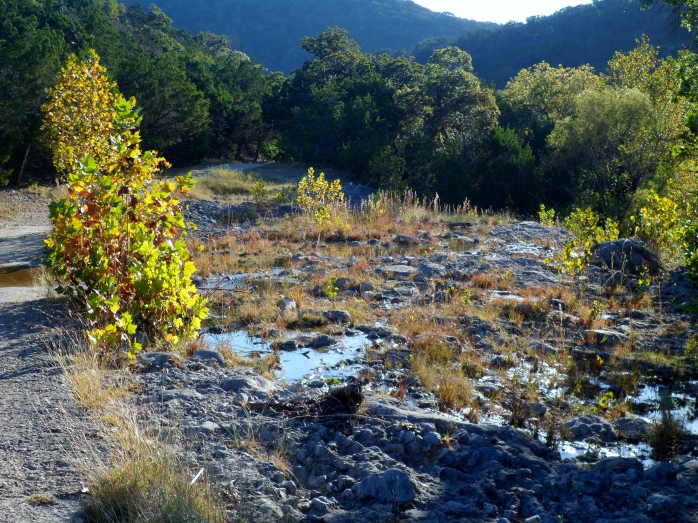 We did very well with full packs and really enjoyed the adventure.  The crowds were not nearly what we were expecting.  In fact, we only had a couple of neighbors in camp and ran into less than 10 hikers overall.  Biff did well, but was definitely wiped out by the end and slept the whole way home.  It wasn’t a super long trail, but was very good for our first official time out and gave us time to really get used to the gear and enjoy the experience.  This will be the first of many I’m sure. 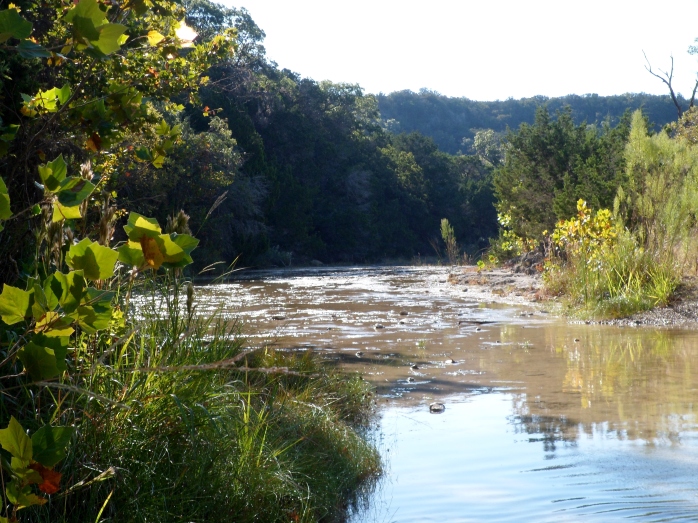 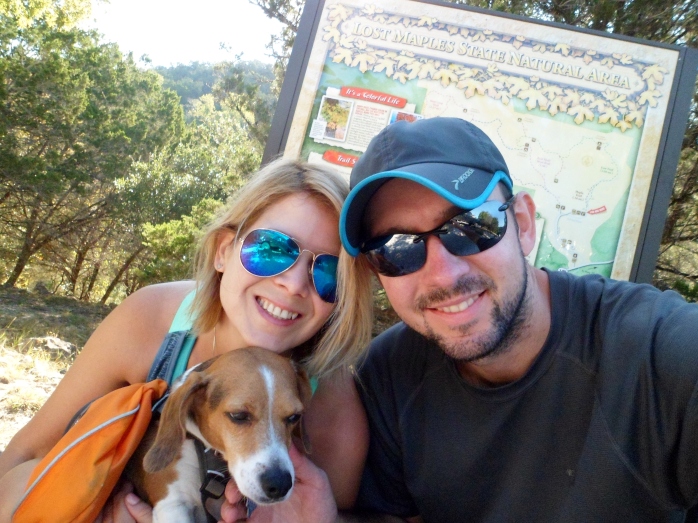