We met PJ and Jack at the trail head around 8:30am on the morning after Christmas.  It was cold!  There weren’t nearly as many cars at the trail head as the last time we did this hike, about a month ago with Ike and MB.  We had to cut that last hike a bit short due to time restraints, so we wanted to get all the way to Highway 360 this time.

Luckily, Court had given me a new hiking jacket for Christmas, so I had an extra layer besides my Patagonia base layer.  It turned out to be barely enough.  If it had been any colder I would have probably needed a puffy jacket.  Gloves would have been a nice addition on this hike as well, but we were ok. 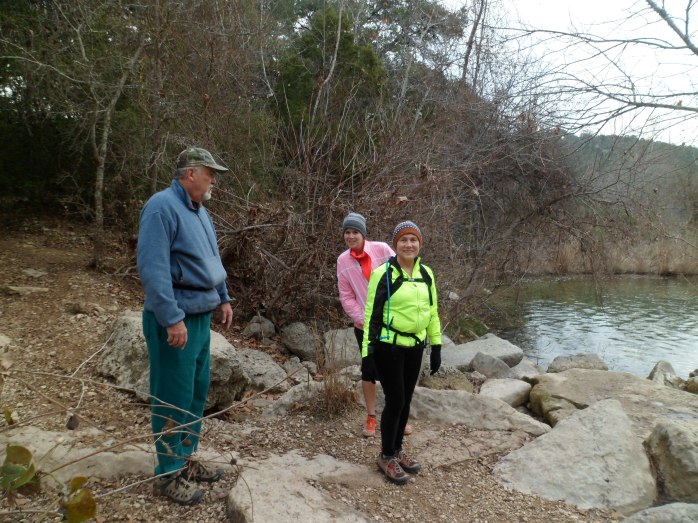 The water is still pretty high, but has gone down a bit since the last hike.  The falls and rapids are still flowing nicely though.  Also, the tree that had fallen across the trail last time had been cut up and cleared.  Biff did well the entire way.  He actually got a burst of energy towards the end and bounded up the 300 foot elevation gain without issue.

We reached the highway and could have gone a little further to extend the hike, but I think we were all a bit chilly and decided to turn back, having reached our initial destination.  The trail gained elevation out of the creek towards the end and it was a slight climb up to the highway.  We were all feeling it a bit the next day in our legs.  It was good to have PJ and Jack along for the hike and I’m sure we will do more with them in the future.